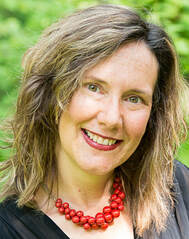 Elizabeth Searle is the author of five books of fiction, most recently her novel WE GOT HIM, and the librettist of TONYA & NANCY: THE ROCK OPERA, which has drawn major media coverage, and she is co-writer of I'LL SHOW YOU MINE, a Duplass Brothers Production feature film forthcoming in 2021. She has other film scripts in development. Her previous books are: her novel GIRL HELD IN HOME, as well as CELEBRITIES IN DISGRACE, a novella that the New York Times Book Review called ‘a miniature masterpiece’; A FOUR-SIDED BED, a novel nominated for an ALA Book Award, and MY BODY TO YOU, which won the Iowa Short Fiction Prize. WE GOT HIM was a finalist for the Midwest Book Award. CELEBRITIES IN DISGRACE and A FOUR-SIDED BED were produced as short films, screening widely at festivals. A FOUR-SIDED BED is in development as a feature film; Elizabeth's script has won multiple awards. Elizabeth's theater works have been featured on GOOD MORNING AMERICA, CBS, CNN, NPR, the AP and more. Her TONYA & NANCY: THE ROCK OPERA has had productions in Boston, LA, Chicago, NYC and more. It had an award-winning 2020 production starring Broadway's Andrea McArdle and has a CD out from Broadway Records. The show has been reviewed as ‘brilliant and touching’ and has generated worldwide media attention. Elizabeth teaches Fiction and Script-writing at Stonecoast MFA.

“Elizabeth Searle is an electric talent and We Got Him is a highly charged, vividly written page turner. Set amidst the 2013 Boston bomber manhunt, Searle's intimate narrative captures both female and male experiences of sex and birth, joy and terror. Testing taboo limits, tuned to our Pop Culture pulsebeat, Searle creates a spellbinding tale for our times..”
Ann Hood

““Elizabeth Searle has long worked the intersection of spectacle and news. She wrote the libretto for “Tonya & Nancy: The Rock Opera,” a story of Olympic skating and scandal that has played in several cities to critical acclaim…For her new novel, “We Got Him,” Searle homes in on the manhunt that followed the 2013 Boston Marathon bombing, around which she weaves the tale of a troubled family. A versatile, darkly comic writer, Searle brings a pulsing, kinetic quality to her work.” JOAN SILVERMAN, THE PORTLAND PRESS HERALD